Gatundu South Member of Parliament Moses Kuria now says he is not opposed to working with the One Kenya Alliance (OKA), provided the team does not join the Azimio La Umoja movement.

Kuria who is seeking the Kiambu gubernatorial seat under his Chama Cha Kazi (CCK) party in the August General Election said he had met with OKA leaders Kalonzo Musyoka, Martha Karua, Cyrus Jirongo and Gideon Moi on Sunday.

The CCK party leader further stated that the team had proposed that Kuria and his party join the OKA brigade.

“They invited Chama Cha Kazi and myself to join the One Kenya Alliance,” he added.

“Whereas we share many ideals between Chama Cha Kazi and OKA, we agreed to work together as long as OKA is not joining the Azimio Coalition which is incompatible with myself and the Chama Cha Kazi Party.”

He stated that he had a scheduled meeting with the OKA co-principals on Wednesday, March 2, to “agree on the way forward.”

On Friday, OKA announced that it had resolved to join the Raila Odinga-led Azimio la Umoja Coalition.

In a joint statement read by Wiper Party leader Kalonzo Musyoka, OKA principals said they had settled on a decision to join ODM and Jubilee parties in forging a grand coalition, dubbed Azimio – One Kenya Alliance.

“The One Kenya Alliance wishes to inform Kenyans that it has officially initiated open and structured dialogue with like-minded political formations, namely the Jubilee Coalition and the ODM Party,” Kalonzo said.

He added that official documentation would be signed on Monday, February 28, after which the agreement document would be presented to the Registrar of Political Parties.

Kuria has been a vocal supporter of Karua in recent months and has often been quoted saying she is the ideal presidential running-mate in the 2022 polls. 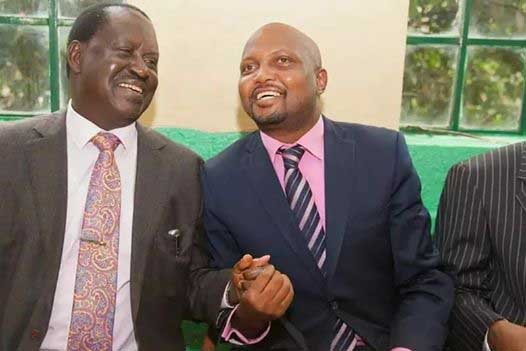