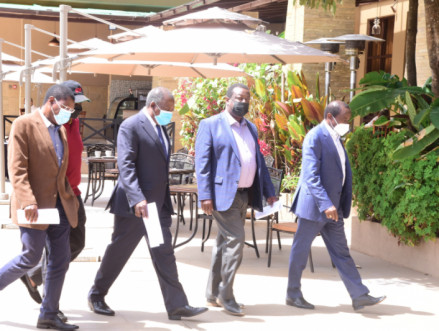 Amani National Congress (ANC) party leader Musalia Mudavadi on Friday skipped a crucial meeting convened by the One Kenya Alliance (OKA) to agree on the method of naming a joint presidential candidate.

Mudavadi’s absence at Elementaita further fueled speculations about his place in OKA and his political future.

OKA leaders however downplayed the development, insisting that they are closing in on a flagbearer.

With less than seven months to the general election, the Elementaita meeting was highly anticipated among OKA supporters and closely monitored across the political landscape.

The meeting was a culmination of the 3-day retreat by a technical team that was tasked to come up with a strategic plan on naming the coalition’s flagbearer.

But the absence of Mudavadi, a key ally, raised eyebrows from the onset in the wake of speculation that he was gravitating towards Deputy President William Ruto.

“I do not think our brother Musalia is the type of person who would be wooed at night and not say it during the day. He says it as it is, so stop this wooing business,” Wiper leader Kalonzo Musyoka told journalists.

After the two-hour closed door session, the principals had a pledge for their supporters.

“We’re likely to unveil our candidate by the end of January…we’re not yet in mid-January, so we still have time,” said Ford Kenya party leader Moses Wetangula.

KANU Chairman Gideon Moi chimed in: “It is work in progress and it’s working, very soon we will be unveiling our presidential candidate…and it will be an exciting time for all Kenyans.”

They dismissed reports that the technical team had settled on 3 options on the presidential candidate and a running mate.

The report is said to have recommended Kalonzo as the flagbearer, with the option of Mudavadi, Martha Karua or Wetangula as the running mate.

“We have received a report of the technical committee…and that report we’re gping to deal with in the next few days/weeks. But, again, those things were not presented to us in that manner, so please let us avoid speculation,” said Kalonzo.

Wetangula added: “As OKA, we will not unveil our presidential candidate at this hotel…it will be a much bigger event in a much better chosen environment within the city of Nairobi, that is the epicenter of the politics of Kenya.”

The team said the next few weeks will be crucial for the coalition.

“We have what it takes, we started the journey and went to Thika …we have a whole program, in the next 20 days we’ll have more than 17 meetings in stadia and marketplaces,” said Kabogo.