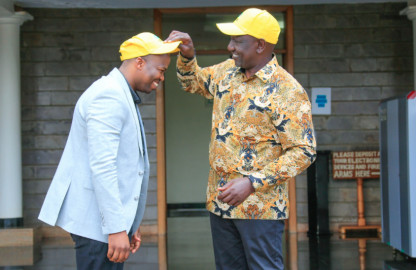 MC Jessy, in a post on Instagram on Wednesday, said the move came following an invite by DP Ruto and advice from his people.

The comedian and corporate MC will now contest for the South Imenti Parliamentary seat in the upcoming polls on a UDA party ticket.

“It’s now clear where the vision is heading. After many days of consultative meetings with my South Imenti people, I have officially been invited to join UDA. The groundwork that has been done has finally landed on the side of the winning team,” wrote MC Jessy.

“When I got the call from the Chief Hustler Inviting me, I had to heed my People’s call and his call to join the winning Team. And may the work of redefining South Imenti now begin.”

MC Jessy, who formally declared his candidature in November last year, said he is best suited to give a new face to the constituency.

The comedian added his name to the battle for the legislative position to replace the incumbent South Imenti MP Kathuri Murungi who has been in power since 2013.

Other aspirants for the seat include Mwenda Gatobu Manyara who is also running on a UDA party ticket.