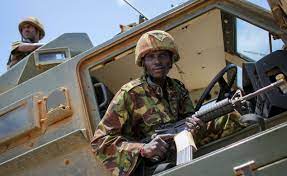 The Madaraka Day Celebrations gave the Kenya Defence Forces an opportunity to display various war artillery and heavy armored vehicles used in the battle field. From fighter jets to artillery vehicles and even naval equipment.

The forces also had their troops from various divisions match forward indicating their disaster preparedness. The display besides showing the country’s preparedness to safe guard the country also was a special way of bidding the President who is the Commander in Chief of the Armed of Forces as he attends his last public national event.

POLICE RECOVER OVER 1,000 BULLETS IN MARSABIT